The group recorded a Return on Average Shareholders' Funds of 10.6 per cent versus its KPI of 8.8 per cent.

As for the Plantation Division, it registered a 56 percent decline in operating profit to RM1.7 billion compared with the previous year.

This was principally driven by lower average CPO prices in the year as well as lower production as a result of biological tree stress and unfavourable weather conditions, it said.
Posted by Mohd Ashraf Abdullah at 11:39 AM 2 comments:

A couple of hours ago, the MCA Presidential Council sacked party deputy president Datuk Seri Dr Chua Soi Lek from all party positions and as member of the party.

The Council which met for five hours on Wednesday night, accepted the recommendations of the party's disciplinary board. The board recommended that Dr Chua be expelled "for bringing disrepute to the party" as a result of a sex DVD involving him.

The board went on with the inquiry despite Eng withdrawing the complaint.

To me, it looks like a double jeopardy for Dr Chua.

On Jan 1, 2008, Dr Chua admitted that he was the man featured in the sex DVD and that the lady involved was a personal friend. He took pains to resign from all government and party posts.

MCA was then led by Datuk Seri Ong Ka Ting. Under Ka Ting's leadership, MCA found Dr Chua's resignation as Health Minister and party vice-president as sufficient. No punishment was meted out.

However, the matter re-surfaced when Datuk Seri Ong Tee Keat took over as party president in October last year. Despite the fact that Eng withdrew his complaint, the Presidential council adopted it.

It doesn't seem right to me. Granted that Dr Chua's tryst is unbecoming of a national leader, but he came out in the open and admitted his mistake. And he was gentleman enough to resign from the Cabinet and as vice-president of the party. This is not something many politicians in Malaysia will do even if they are caught with their pants down (no pun intended).

Dr Chua did not wait for others to punish him. He punished himself. After he had served his "sentence", the party finds it fit to punish him all over again. If this is not double jeopardy, I don't know what is.

The Presidential Council and the disciplinary board may comprise senior members of the party, but they do not represent the voice of the majority. A good number of MCA members do support Dr Chua and have forgiven him for his sins. It was this support that enabled Dr Chua to win the Deputy Presidency in the recent MCA elections. Dr Chua's supporters should never be taken for granted.

"Tarnishing the party's image is a very serious crime. I'm lucky they didn't sentence me to death. Gantung (sampai) mati," Dr Chua was heard telling reporters as he left the meeting of the presidential council, midway.

Dr Chua has 14 days to appeal.

I think, MCA is now officially, in crisis.
Posted by Mohd Ashraf Abdullah at 2:12 AM 5 comments:

Better to be safe than sorry... 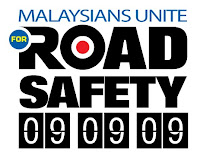 Projek Lebuhraya Utara-Selatan (PLUS) is embarking on a road safety campaign with a difference. It is called "Malaysians Unite for Road Safety 090909". I think this is a good step towards reducing the number of accidents in Malaysia which kill more people daily than any disease including h1n1.

The campaign involves engaging the people. Motorists can actually go to the website at www.090909.org.my and make a pledge to do away with a bad habit. I have pledged to stop SMSing while driving, a promise I plan to keep. The website has received 83 pledges so far.

The campaign will begin on 9/9/99. The date was chosen because 999 is the number to call during emergencies and also because 9 is an auspicious number to the Chinese.

Shut down the schools before we are sorry!

I have been getting an earful from my sister Saro, a mother of two, every day over the past three days or so. So much so, I dread answering her phone calls. She is worried sick, bordering paranoia, over the infuenza h1n1 (I shall not glorify this disease by even putting its name in the upper case).

Her daughter, my niece, is in form 5 and goes to school in Bandar Sri Damansara. Apparently, the teachers in the school wear face masks but the pupils are not given any.

She refuses to allow my niece to go to school and makes her stay home. I am a parent myself, and I have been doing the same. I refuse to allow my eight-year-old daughter attend school. My son who completed his PMR trial exam yesterday is going to stay home too.

Like my sister, I am concerned about my kids. So I do take exception to the Minister of Health Datuk Liow Ting Lai's remarks that there is no point declaring a school holiday because school children will only go to places where they can catch the virus. I think his statement is an insult to every civic, right-thinking Malaysian.

As of today, Malaysia which only has a population of 27 million, recorded 56 h1n1-related deaths. Liow can say what he wants, but I think this is quite alarming. The population:h1n1-patient ratio in Malaysia is indeed high compared with other countries.

To date, India, which has a population of 1.14 billion only has 22 deaths. The authorities in Mumbai, where the highest number of cases were reported, have shutdown schools, colleges and cinemas. The did so at the risk of severely impacting the Bollywood movie industry. As we know, India churns out the most number of movies in the world and the movie industry is a major contributor to the country's GDP.

Mexico, where it all started, only recorded 163 deaths so far.

I think the Government of Malaysia must resort to drastic measures. The problem is compounded by the high number of dengue cases. Government hospitals are full to the corridors. We don't have enough doctors and nurses to handle the situation.

Worse, the Health Minister keeps saying that all those who died are within the "high-risk" group. Ironically, the number of diseases which fall under the high-risk category as given by the Health Ministry is growing by the day.

Obesity is the latest to join the list. Earlier, high-risk was just confined to diseases of the higher respiratory tract, including asthma, lung and perhaps heart diseases.

It seems to me that we are simply looking for excuses and now we are running out of them. Yesterday, a 19-year-old teenager died. I wonder what was his risk factor.

So Mr Minister, if I have piles (not that I do), will I be high-risk too?
Posted by Mohd Ashraf Abdullah at 2:48 PM 2 comments: