The passing of a journalism Guru... 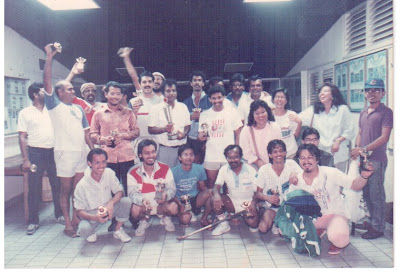 Caption: K. Bala, the team manager of the NST Editorial hockey team holding the trophy after the team emerged champion in the NST Inter-Department hockey tournament. Three others in this picture - John Pillay, M.A. Razman (aka Rattan Singh) and C. Navaratnam - have since passed on.

I lost yet another journalism sifu today.

K. Bala, who used to send shivers down the spine of every journalist I know at NST and Malay Mail, died in his sleep in Pulau Langkawi last night. He has been spending a lot of time in this legendary island upon his retirement some 15 years ago. He grew so much fondness for this island that even in his ill-health, he visited the island on and off.

Bala was a taskmaster, but never stinged on passing on his knowledge to young reporters. I was among them. He scolded us everyday, made sure we got out of the office to meet contacts and made us sit next to him when he was clearing our stories. As much as he grumbled, he taught us.

There are many stories about Bala. If I decide to write a book in future, perhaps he will take up a whole chapter.

Saiful, Kams and I had made plans to visit Bala one of these days. That didn't take place because the three of us couldn't actually agree on a suitable time. We now have to live with the regret that we didn't.

Goodbye Bala. Thank you. The country's journalism fraternity mourns your passing. May you rest in peace.
Posted by Mohd Ashraf Abdullah at 11:16 AM 3 comments:

To those unfamiliar with the Sime Darby Berhad project in Qatar, here is some background. This is what The Edge wrote on March 8, 2010:

The saying that there is no smoke without fire rings true yet again. This time it relates to the year-old speculation of losses incurred at Sime Darby Bhd’s oil and gas (O&G) projects in Qatar.

The MOQ project had been dogged by rumours of cost overruns and losses — from as little as RM120 million to as high as RM800 million — in 2008 and 2009, all of which were denied by Sime Darby.

Two weeks ago, this publication highlighted the possibility of a provision of over RM100 million on Sime Darby’s other Qatar project — the RM1 billion Qatar Petroleum project in the Bull Hanine and Maydan Mahzan fields.

It turned out that the provisions were for MOQ to the tune of RM210 million. Both projects were awarded to then-listed Sime Engineering Services Bhd in 2006 and 2007.

When contacted, Sime Darby says the cost overruns were incurred on transport and installation, and hookup and commissioning works. These costs have been booked in and the project is expected to be handed over soon, it adds.

It is not clear if the overruns were the result of under-budgeting, an unexpected increase in raw material costs, or both, or some other reason.

In FY2009, Sime Darby had provided for the Qatar Petroleum project which resulted in losses of RM80 million for the O&G sub-segment. The project was completed and handed over last year.

The MOQ project is now 96% completed. In an analyst briefing, Sime Darby gave the assurance that all cost overruns had been provided for, and confirmed this in its response to
The Edge.

Besides a change in leadership at its energy and utilities division, following the resignation of Datuk Mohamad Shukri Baharom who has been replaced by Hisham Hamdan, Sime Darby says it is also taking steps to prevent a repeat of the cost overruns. Hisham was previously the executive vice-president for group strategy and business development.

“We are in the midst of reviewing and reevaluating the systems and processes in the division. Naturally this will involve tightening controls and ensuring the highest standards of project management and monitoring. The review will take more time. In the meantime, we continue to position ourselves to bid for more contracts and projects, and we are confident that the division will become an integral part of the group’s overall growth strategy,” it says.

Be that as it may, why weren’t the controls and high standards already in place, especially after the Synergy Drive mega merger involving eight listed companies (including Sime Engineering), whose ultimate goal is to grow shareholder value?

Some may consider the amount of RM210 million to be immaterial to a company with a market capitalisation of more than RM50 billion and makes an annual profit of over RM2 billion. Besides, the energy and utilities division is among the smaller of Sime Darby’s five core businesses in terms of revenue and income. Still, it is good money which could have been put to better use. Incidents like cost overruns indicate incompetence and inefficiency, which only support the argument for Sime Darby to overhaul its diversified and sprawling operations, including the listing of its plantation unit and selling the auto business.

Given the energy and utilities’ smallish contribution to Sime Darby’s bottom line, investors may find it easier to forgive the losses (the RM210 million provision works out to 3.5 sen per share) as they are overshadowed by the group’s combined earnings. This argument supports the case for keeping Sime Darby’s various businesses intact.

If the Synergy Drive merger had not taken place, the impact would have been more visible — possibly on the share price of Sime Engineering, for instance. Then again, cost overruns are not totally alien to Sime Engineering. Since its listing in August 2003, it fell into the red in FY2004 and FY2005 due to provisions for cost overruns.

Sime Engineering was the lead partner with a 35.7% stake in the Malaysia-China Hydro Joint Venture, which was constructing the main civil works for the Bakun Hydroelectric Project. The contract was worth RM1.8 billion. In FY2004, Sime Engineering made a provision for RM77.1 million for foreseeable contract losses arising from changes in the cost structure of the project.
In FY2005, it made an additional provision of RM55 million on the same project as it experienced delays, bringing the total provisions on the project to RM130 million.

Although it has to be said that the recent provisions were for the O&G sub-segment and the earlier provisions were from the construction business, one can’t help but wonder whether Sime Engineering has learnt from past experience.

To be fair, cost overruns and delays are risks prevalent in engineering and construction works, and 10% cost overrun is sometimes considered the norm depending on the nature of the job and reasons for the cost increase. The good news is negotiations with the client could lead to write-backs. However, these may take time.

With a new guy helming Sime’s energy and utilities division, shareholders and investors will be keen to see if he can bring about positive changes to the O&G business and entire division as well. With a growing list of cost overruns, investors will certainly be watching closely.

You can read the article here.
Posted by Mohd Ashraf Abdullah at 7:06 PM 1 comment: 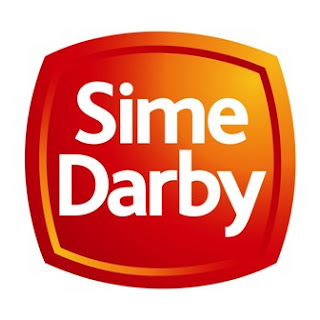 I suppose it just can't be hidden through creative accounting anymore. My friend Big Dog wrote about it on Feb 9, 2010. Read it here.

The truth is Sime Darby has incurred losses of almost RM1 billion from its project with Qatar Petroleum. At a townhall meeting with Sime Darby staff last week, its Group Chief Executive Officer and President Datuk Seri Ahmad Zubir Murshid admitted that the company had incurred heavy losses in Qatar.

Aparrently the project was a mistake ab initio. Under-quoted from the very start, compounded by lack of knowledge and shortage of expertise.

I am surprised that the Sime Darby Board did not or has not called for the resignation of the top management. The mere resignation of Sime Engineering Services' managing director Datuk Mohamad Shukri Baharom (picture above) is insufficient.

When Golden Hope Plantations Berhad incurred trading losses of a mere RM120 million due to the doing of a rogue trader, Dato' Sabri Ahmad, the former Group Chief Executive of GHope, was asked to resign from Sime Darby. He joined Sime Darby as the adviser for the plantations division for a few months when Golden Hope merged with Sime Darby in November 2007.

Two others Razidan Ghazalli - the Finance Director of Golden Hope and Muhammad Mohan Abdullah, the General Manager of a Golden Hope subsidiary, Golden Jomalina Sdn Bhd, were sacked when they refused to resign.

Both Muhammad and Razidan took legal action and sued Sime Darby for wrongful dismissal. But Sime Darby, perhaps in an admission of guilt, chose to settle the mattter out of court and paid them off handsomely.

I have one question to ask the Sime Darby Board: Why the double standards?

I am waiting eagerly for the Prime Minister's GLC transformation efforts. Sime Darby certainly needs to be transformed from the top to bottom.

Loss of staff morale is a big issue in Sime Darby. I was told that close to 20,000 have resigned since the November 2007 merger. This has heavily hampered productivity.
Posted by Mohd Ashraf Abdullah at 7:40 PM 3 comments: