Indonesian maids: can we do without them?

Before you read any further, See this video and this.

In 2001, when my daughter was just four months old and my son in standard one, my maid, an Indonesian from Medan decided to abandon them and run away with her new found boyfriend, her country man.

Fortunately for me and my wife, she decided to do so on a Sunday when both of us were at home. She was seen by a neighbour walking about in my porch restlessly about 5.30am. She was obviously waiting for someone to pick her up. My wife and I woke up to find her long gone.

When she came to work with us, we accepted her as a family and gave her a day off on Sundays. Sundays will be a day of outing for her and other Indonesian maids in my neighbourhood. So together, they would go out and return about 6pm.

It was during one of these outings that she met the Indonesian man who she eventually ran away with. A neighbour's maid later admitted to us that my maid would see the man every Sunday without fail. To this day, I don't know what happened to her. The man could have been a member of a syndicate supplying illegal maids, or worse, could be a pimp.

Having learnt a lesson from these ordeal, we decided not to give day offs to my second maid who joined us about three months after the first one ran away. Each Hari Raya Aidil Fitri and Hari Raya Aidil Adha, we gave her a small bonus. No complaints, and everything was fine.

She stayed with us for seven years and decided to return to Indonesia only when her daughter had a baby and needed her to babysit. We had no problems with her. There were no problems because we didn't give her the opportunity to mingle with the outside world.

My point is, I do not welcome the Government's idea of making it compulsory for employers to give a day off to maids.

It is going to cause serious social problems. Surely, the number of missing maids is going to increase. They are going to show up in whorehouses. Human trafficking will increase, and Malaysia may be accused of being the hub for the trafficking of Indonesian women.

The problem is, whenever there is a case of maid abuse, etc, although isolated, the Ministry of Human Resources stoops to the pressure of the Indonesian Government. Each time such a case is reported in the Press, the Minister responsible will propose new regulations. Some times they are implemented, some times they are not.

I don't intend to cause a diplomatic row between Malaysia and Indonesia, but why should the Malaysian Government bow to Indonesia. If the Indonesian Government wants to stop sending maids to Malaysia because of a few isolated cases of maid abuse, so be it. We can consider employing maids from elsewhere. At the same time, we can also consider stopping recruiting Indonesian workers in the other economic sectors.

And who cares what the United States says about us. Remember, American corporations are the biggest culprits when it comes to employing child labour at their overseas operations. So is the US really in a position to talk dictate Human Resource policies?

An isolated case of maid abuse in Malaysia is often blown out of proportion. But what about maids who abandon helpless young children under their care and run away, leaving families in a lurch? What about the cases of maids abusing children? What about cases where maids work in cahoots with thieves who break in and steal their employers' valuables? What about maids getting pregnant because they use their day offs spending time with their new found boyfriends?
Posted by Mohd Ashraf Abdullah at 2:10 PM 15 comments:

I've finally signed on the dotted line. I am joining TV3 as Group Editor with effect from Thursday June 18, 2009.

Although I was a reporter and an editor with the New Straits Times for 16 years from 1988 to 2004, broadcast journalism is new to me, and thus my new job is going to be rather challenging.

I acknowledge the fact that this job comes with a huge responsibility. It will require hard work and dedication. Basically, my responsibility will be to make TV3 news programmes more interesting and viewer-friendly.

My performance will be based on whether the rating for news programmes goes up.

Husam's defeat a rejection of Anwar? 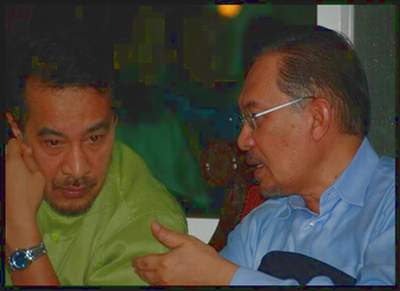 If that is the case, surely Pakatan Rakyat, the adhoc coalition of Opposition parties are in for more trouble. This is so because Anwar has clearly proclaimed himself as the leader of the so-called coalition.
Posted by Mohd Ashraf Abdullah at 11:47 AM 2 comments: