Umno back to its glory days? 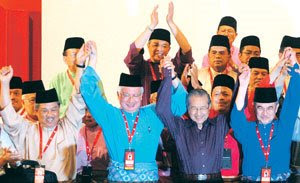 This is by far the best local picture I have seen in years.

I am glad former Prime Minister Tun Dr Mahathir Mohamad has decided to put aside his differences with Datuk Seri Abdullah Ahmad Badawi and promised to return to Umno.

I don't think any Malaysian, irrespective of his or her political affiliation, will deny that Dr Mahathir is a great Statesman. His wisdom and advice is sought after not only by leaders of the developed world but also those of the developed world like former Prime Minister of Britain Margaret Thatcher (now Baronness).

Umno needs the experience of Dr Mahathir and Abdullah. Both have seen Umno at its best and its worst.

Umno has no time to waste. Past and present Umno leaders must put their shoulders to the wheel and ensure that Barisan Nasional will be given overwhelming support by the rakyat in the 13th General Election which has to be held by 2013. Differences must be thrashed out within closed doors.

Past leaders must remain in the background. They must not be seen to be interfering with the functions of the Government. They must give in-coming Prime Minister Dato' Sri Mohd Najib Tun Razak a free hand to run the Government.

Now that Dr Mahathir and Abdullah have agreed to help Umno to return to its past glory, I am confident that Barisan Nasional will once again become a force to be reckoned with.

I am confident that the Brisan Nasional led by Najib will be given a landslide victory in the next general election, similar to the one in 2004, hardly a year after Abdullah took office.

To begin with, I hope both Dr Mahathir and Abdullah will help BN campaign in the Batang Ai, Selambau and Bukit Gantang by-election on April 7.

A win in all the three elections will send a strong signal to Pakatan Rakyat that Umno has been reborn, and is now stronger than ever before.
Posted by Mohd Ashraf Abdullah at 9:26 PM 6 comments:

Najib takes over as captain in stormy weather

I congratulate the new Umno President Dato' Sri Mohd Najib Tun Razak and his "dream team" who were voted into office by party delegates on Wednesday and Thursday.

I am confident that under Najib's stewardship of Umno, the party will be steered back to its past glory.

Najib and his team have only about three years to regain the people's confidence in Barisan Nasional. In politics, three years is extremely short.

I am sure, however, that Najib will be able to do it despite having to weather the storm along the way. Half the battle would be won when Najib rids the party and the Government of corruption.

I am looking forward to it.
Posted by Mohd Ashraf Abdullah at 1:23 AM 1 comment:

Dalam komennya tentang pakej rangsangan bernilai RM60 billion yang dibentangkan oleh Najib pada 10 Mac lepas, naib presiden PKR Tian Chua berkata: "I have to stay out of the parliament chamber. I have no appetite to stomach craps from a murderer."

Dubus and the Anwar connection

Utter rubbish! But Dubus' article was lifted by Malaysiakini.

Apparently, one of the owners of the newpaper Edouard Rothschild who owns a majority 37 per cent of the newspaper through his investment of 20 million Euros in 2005, is a close ally of Anwar. The left-wing daily was founded by philosopher Jean-Paul Sartre and Maoist militant Serge July in 1973 but in recent years has sustained substantial losses and struggling to increase its circulation.

The French multi-millionaire is the head of Rothschild & CIE bank which he founded in 1987.

Rothschild worked closely with Anwar through the World Bank and International Monetary Fund as well as the State Department-funded Foundation for the Future, of which Anwar was once Chairman.

In his article which is highly defamatory to Najib and Rosmah, Dubus claimed that in the course of writing his article, he had travelled to Kuala Lumpur and Ulan Bator, the capital of Mongolia.

I have many questions for Dubus? Who did he meet in KL and Bangkok? Who fed him with all the lies so convincingly that he so naively took them for Gospel truth? Must be someone for whom he holds high regard. Who looked after Dubus when he was in KL? Who facilitated his investigative reporting?

Najib is not as naive as his predecessor Datuk Seri Abdullah Ahmad Badawi. Anwar is afraid that under Najib's stewardship, Barisan Nasional will regain its strength. Anwar, his Part Keadilan Rakyat and the adhoc Pakatan Rakyat alliance will then slip into oblivion.
Posted by Mohd Ashraf Abdullah at 1:45 PM 2 comments:

Enough is enough! Police should act against Najib's accusers

It has become quite obvious that as the date for Dato' Sri Najib Tun Razak to take over the nation's premiership draws close, the number of campaigns to smear his good name is increasing.

The latest of one of these campaigns is a purported article which appeared in the left-wing Liberation newspaper, written by journalist Arnaud Dubus. The article, which was lifted by news portal Malaysiakini, makes various allegations against Dato' Sri Najib, his wife Datin Seri Rosmah Mansor and Abdul Razak Baginda.

Abdul Razak was initially charged with the murder of Mongolian Altantuya Sharibuu, but was later acquitted without his defence being called.

Apparently, Dubus' entire article is based on a single document which was never produced in court. The fact that the document was never admitted in court, can only point to one thing - it is not credible.

The article also purportedly links Altantuya's murder and her acquiantance with Abdul Razak Baginda to Dato' Sri Najib and Datin Seri Rosmah and the purchase of submarines from France.

There are several issues here which need emphasis. Firstly, the Government has cleared Dato' Sri Najib from any wrongdoings in the submarine deal. The payment of Euro 115 million was not as commission but for services rendered to the French party. This has been answered in Parliment. Again, no issue. To those who are not happy, check the Parliament Hansard.

Secondly, Dato' Sri Najib has denied knowing Altantuya. In fact, as a Muslim he did what most other Muslims would fear to do, swear upon the Al-Quran. No guilty Muslim would do so. One example is Datuk Seri Anwar Ibrahim.

Thirdly, everyone know that the alleged picture of Dato' Sri Najib with Abdul Razak and Altantuya, does not exist. Perhaps the journalist got hold of the one doctored by Tian Chua (who admitted to doctoring the picture by inserting a photo of Dato' Sri Najib). This is the same Tian Chua who talks about ethics, human rights, equal rights, etc. The picture which he doctored is now all over the internet. If seen by the ignorant, they may assume that it's authentic. Dubus is one of the many ignorant ones. This is the extent of the damage created by Tian Chua.

I can't for the life of me understand why those who are against Dato' Sri Najib continue to harp on the Altantuya issue. The police have repeated said that he was not involved in the murder of Sharibuu.

Perhaps these people have run out of issues. And perhaps these people are worried that Barisan Nasional will regain the strength it lost under Datuk Seri Abdullah Ahmad Badawi and would once again become a force to be reckoned with.

Accusations such as the one made by Dubus and given credence by Malaysiakini is an outright criminal defamation. I think it is time for the police to take action against those who hurl baseless accusations against the Deputy Prime Minister.

The police have a duty to protect the leaders in this country, especially the person who will become the Prime Minister of Malaysia in less than a month.
Posted by Mohd Ashraf Abdullah at 9:15 AM 6 comments: