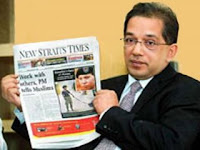 For Datuk Seri Abdullah Ahmad Badawi, who in March will become the shortest serving Prime Minister in Malaysia's history, five years and four months is good enough. The fact that he has to step down because he has lost support, is a different matter. Whatever it is, his name is going down the annals of history as Malaysia's fifth Prime Minister. And that is quite an achievement.

Unlike his predecessor, Abdullah was dependent on his advisers. And these advisers, all with their own agenda to make money or advance their own political interests, were the actual cause of his downfall.

One of Abdullah's closest adviser is Datuk Seri Kalimullah Maseerul Hassan, the Deputy Chairman of The New Straits Times Press (M) Bhd. I first came to know Kalimullah when I joined the PETS Training in NST in 1987. I was then just 20 years old. Having quit from The Star, he had just joined NST as a senior reporter, but wasn't much of a journalist. Lagged far behind the likes of Sabri Sharif, Fabian Dawson, R Nadeswaran, etc. He never made it to an editor in any of the Malaysian newspapers.

I now believe that Kalimullah had no interest in journalism at all. Journalism was just a stepping stone to bigger things. His interest is only in making money, huge profits, like he is making now.

Abdullah's advisers, including Kalimullah, only told him what he wanted to hear. They hid the truth. They deliberately did not tell him about his dwindling support. They wanted him to remain in power so they can "make hay while the sun shines". They had no qualms about Abdullah being ridiculed and laughed at. They just wanted him to stay in power for as long as he could. They knew that it wouldn't be long. So in the last five years, they did what they could to amass wealth and push their political careers to dizzying heights.

It will be impossible for me to list all the projects that Abdullah's relatives and friends, including Kalimullah had secured over the last five years. My aging computer. I think, does not have enough capacity to carry such a long list.

And yet, Kalimullah, in his column in the NST today (10 October 2008), had the audacity to tell Prime Minister-in-waiting Dato' Sri Mohd Najib Abdul Razak not to give projects to his cronies.

I know Najib. And I know he is not as gullible as his "soon-to-be" predecessor. Najib deserves a chance to undo all the wrongs that Abdullah and his cronies did. Najib needs time to rehabilitate Barisan Nasional in time for the 13th general election in or before 2013. The people should refrain from making wild accusations against him because someone somewhere started it for his own interest.

I can't speak on behalf of Najib. If I could, I would have this to say to Kalimullah: TAKE YOUR ADVICE AND SHOVE IT!
Posted by Mohd Ashraf Abdullah at 10:46 AM

This is exactly how a 'drowning dog' like Kaliular would behave. This shit-eating pariah dog is the No1 reason for Abdullah's downfall and now he is trying to advice the next Prime Minister while demonising a former PM and Statesman.
If your time is up and your dog-licence issued by Cairy has expired, just go back to the ally you came from and start eating your favourite hot-pudding.
If you still choose to hang around the mansion, someone is boiling water to give u a Hot-Bath.
It's your choice DOGGY! Hang around, bark like you alw3ays do and get scalded or just F@#k off before its too late.

Bloody pariah! You got no feeling of shame kah?

Ashraf, if i am not mistaken, you were one of the senior editors who tried to be pally with Kali when he assumed power. You left probably because you not make any headway. Now you are singing a different tune. As for me, I tried to carry his balls, but got nowhere them. So sad. So Ashraf, time to make a comeback to the NST, but dont forget me.

Kali should actuall write a book about the list of projects he got from Pak Lah ... starting with the land reclamation project in Kedah.How he actually sleeps at night after writing all the crap puzzles me.Sorry to say this ...nstman ,ur full of shit Bro ,get a life.

Whatever said and done, the powers that were have brought the NST to its knees and below! The sincere hope from those within the NST is that whoever helms it in future would for once not use it for any particular agenda and treat the newspaper as a newspaper and report what needs to be reported. It is saddening over the years to see what has happened to once a great newspaper and how it is sometimes just used to wrap nasi-lemak and char kuew teow! Whether u, Ashraf or whoever heads the paper in future, we sincerely hope u will do your best to bring the NST back to being a credible, reputable newspaper. Please dont be another Pereira or Waran and make the NST look like crap! Cheers man and all the best!

Please remember to love those who trespassed against us. The truth shall set us free.